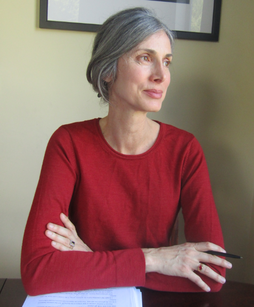 Christine Leunens was born in Hartford, Connecticut to an Italian mother and a Belgian father. As a teenager she  moved to Paris,  where she had a close relationship with her grand-father, Guillaume Leunens, the Flemish painter and sculptor. She funded her study and early writing by modelling in Europe, becoming the face of Givenchy, Paco Rabanne, Nina Ricci, Pierre Balmain and Sonia Rykiel, acting in TV ads such as Mercedes Benz, Suzuki and House of Fraser. She went on to earn a Master of Liberal Arts in English and American Literature and Language from Harvard University in 2005, and a PhD at Victoria University of Wellington in 2012.

Her debut novel,   Primordial Soup, published in the UK in 1999, was a critical success, receiving praise in The Times, The Sunday Times, The Independent, and Publishers Weekly.

Since its first publication in 2004, Caging Skies    has become an international bestseller, translated into over twenty languages. In 2007 the French translation was nominated for the Prix Médicis  Étranger and the Prix du Roman FNAC.

A Can of Sunshine   was selected as 'Best Books of the Year 2013' in English worldwide by the NZ Herald.

Over time,   Caging Skies    was adapted to stage and film. The play adaptation, written by Desirée Gezentzvey and directed by Andrew Foster, had its world premiere at the Circa Theatre, Wellington in 2017.  Taika Waititi’s film adaptation,   Jojo Rabbit,  won the People's Choice Award at the 2019 Toronto International Film Festival, was nominated in 2020 for two Golden Globes, six BAFTAS,  and six Academy Awards, including Best Picture. It won the WGA Award,  the BAFTA Award as well as the Academy Award for Best Adapted Screenplay and ultimately was selected as one of WGA's 101 greatest screenplays of the 21st Century. It also won the Humanitas Prize for writing intended to promote human dignity, meaning and freedom. Both the film and the book were nominated for the USC Scripter Award 2020 and won AFI Awards for their contribution to America's Cultural Legacy.

Christine currently lives with her family in New Zealand.  Her new novel  , In Amber's Wake, is  being made into a film by Mimi Polk Gitlin, the producer of  Academy Award-winning   film   Thelma & Louise.