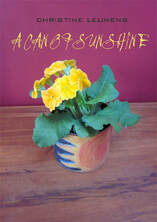 ​“A compelling read that will resonate with any mother or daughter-in-law who wouldn’t necessarily be friends, if not for their common ground.”
NZ Herald’s Best Books of the Year  2013

​“ ‘A Can of Sunshine’ opens with Nancy, an American, living in New Zealand with her husband, Mike, and daughter, Chloe, with Mike’s mother, Edith, a persistent and not entirely welcome presence. But when an event radically changes Nancy’s life, she must re-examine her relationship with Edith and choose how – and indeed, whether – to continue it.   The story has appeal and intelligence”.
The New Zealand Listener
“We meet three generations of women in the first few pages... these women are in-depth characters... the dialogue is superb... Edith provides much of the humour and poignancy too, growing older... The narrative never stalls, it’s always moving forward to a very satisfying, surprising ending. Everybody should pick up A Can of Sunshine by Christine Leunens.”
Ruth Todd, Bookenz, Plains FM

“The often charged mother-in-law/daughter-in-law relationship is explored by American-born author Christine Leunens in A Can of Sunshine. Now living in the Manawatu, Christine's new novel looks at how the idiosyncratic mother-in-law proves to be both a blessing and an occasional curse for a solo mother. Nancy is an American living in New Zealand and when her world is turned upside down she needs the help of the interfering Edith. The mother-in-law in the novel, Edith, is actually quite a complicated character once one gets to know her; ultimately she’s a lonely soul and she’s struggling with getting old.”
Lynn Freeman, Arts on Sunday, National Radio

“A woman and her mother-in-law. Slaughters of teasing, recriminating reproaches, and an unexpected female complicity.”
Cultura & Spettacoli

“Is the rivalry between the proverbial mother-in-law and daughter-in-law really necessary or is it just an urban legend? It is this family relationship that is at the heart of A Can of Sunshine by Christine Leunens (Meridian, 2013), with all the contradictions, emotions and vicissitudes that two people connected only by affection for the son / husband may face in the course of a lifetime... Christine Leunens tells the story in a masterful way as she sheds light on this swinging relationship... A Can of Sunshine is a novel about love, loneliness, and the joys, sorrows and conflicts that life places before us. But it is also and above all a novel about three generations of women, each of whom finds, in a different way, strength within herself to stand up and fight back, to recover and reinvent a life even when everything around them seems to indicate that there is no way out. A book about hope for the future.”
Flanerí

“Dedicated to those who detest the predetermination of social roles, and who want to investigate the complicity of the soul of every woman.”
Le Nuove Mamme

“This    girl can write, with a style that is intelligent, observant and witty. For me, this was an unusually rewarding read. But don’t just take my word for it – The New Zealand Herald included A Can of Sunshine among its list of the 25 best books published in English worldwide, and one of only three written by New Zealanders (the others being by Booker-prize winner Eleanor Catton, and the other by Dame Fiona Kidman). Highly recommended.”
NZ Motorhomes, Caravans and Destinations

“Christine Leunens depicts the complex relationship between the principal female figures in a man’s life and how grieving for this man totally destabilises the relationship between these women. A narrative all in subtlety. In a light-handed, almost imperceptible manner, A Can of Sunshine provokes thought on the passing of time, the directions one chooses in life, and how one will inevitably apprehend death. It troubles and stays with the reader long after closing the book. It’s a read that’s as pleasant as mysterious and leaves one in a blur of sentiments overall, though very precise ones over the disturbing and poignant last scene. A piece of literature that is strange and indefinable.”
Adepte du Livre

“A moving novel that brings to the fore very colourful characters. Despite being extremely touching, however, the novel never turns into a tear jerker and manages to remain consistent in quality despite few twists and turns to the plot. Through the pages, one discovers that the characters reveal themselves as more complex than they had at first glance seemed. They affirm themselves and grow through the pages, revealing little by little unsuspected facets of their personalities. Christine Leunens succeeds in keeping us interested by the simplicity but very precise style of her writing. I loved the recurrent absence of temporal markers, which invites us to think and asks ourselves where a scene situates itself in time. Undeniably an excellent author and it’s not only because she lives in New Zealand that the New Zealand Herald chose this novel as Best Books 2013.”
Conso Magazine

“It is interesting how A Can of Sunshine enters into the complex emotions of these two women that grief reunites though everything else separates them. New Zealand is there in the background, like a painting, and we get attached to diverse characters by their human sides and imperfections. Moreover, in the extravagant manners and comments of Edith lurk real questions, notably about age and the passage of time. Indeed, ‘who’ decides (Decency? Morality? Desire?) what is acceptable to do in life and the precise moment where one inevitably crosses the age limit? I loved living several days in the pages of this novel. To discover!”
Les Lecteurs d’Antigone

“What happens when a mother-in-law experiences the terrible drama of her son’s death? This is what Christine Leunens writes about in A Can of Sunshine, or how a grieving mother attempts to manage her daughter-in-law’s life, creating an unbearable situation. The poignant narrative moves between their awkward separations and their becoming close again, forever linked as they are by the memory one of so loved.”
Nord Litteral

“Christine Leunens spent four years working on a doctoral thesis, whose subject was mother-in-law/daughter-in-law relations, and it’s indeed this theme, rarely explored, that is at the heart of this novel. With great finesse, Christine Leunens dissects the moving relationship between Edith and Nancy with their awkwardness, their fall outs, their tender moments too, and delivers a sensitive novel that... is also of great intelligence and remarkable originality.”
Book of the Weekend, Radio Classique

“A beautiful novel from the Antipodes on love and life. The very New Yorkish Nancy has left everything behind to go live in New Zealand with her husband Mike and their seven-year-old daughter, Chloe. Their life there is peaceful, only from time to time troubled by the presence, a little bit excessive, of Mike’s mother, Edith. A holiday in Fiji will change their life forever and transform the relationships between all the members of the family. The two women will have to learn how to live again and how to get along despite the loss of husband for one and that of a son for the other. Nancy, Edith and little Chloe, three generations of women linked by one so loved and missed, will have to find the strength to forgive each other and move on. Joy and tears will each have their moment until, in the natural course of time, darkness gives way to light. In this novel, filled with truth, reality and poetry, Christine Leunens puts strong words on the feelings that nag a human being when a death turns everything upside down. Powerful.”
Onirik

“Nancy, a New Yorker residing in New Zealand, is married to Mike, with whom she has a little Chloe. One follows her through her family happiness and stays with her when she suffers the death of her husband, then faces her loss and tries to rebuild her life. The narrative explores the complex relationship that she has with her mother-in-law Edith, who is intrusive and distant one day and a confidant and ally the next. The authoritative old woman remains an eternal mystery in the eyes of Nancy, who experiences mixed and sometimes mitigated feelings for her. A writing that is exploratory and strongly imaged well serves a female friendship that is awkward and moving.”
Air Le Mag