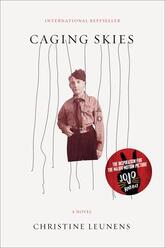 “A vivid and deeply compelling novel, Caging Skies is an existential battle of moral and ethical extremes. Christine Leunens is an adept and eloquent storyteller.”
Georgia Hunter, New York Times bestselling author of   We Were the Lucky Ones

“Leunens is a strong writer, her prose supple and darkly engaging. Her depiction of wartime Vienna is nearly cinematic and utterly convincing.”
Kirkus

“It is a beautiful novel, powerful, different, and ambitious. It explores a less rare form of relationship, it appears, than one believes: love so total that it locks up, isolates and colonises the partner until destruction; annihilates the outside world. This kind of passion naturally implies the lie, the dressing up of realities and the construction of a wall to protect itself. It’s without a doubt in the malaise one feels when reading     Caging Skies   that one recognises the surprising, surprising power of the novel. A profound malaise, which lasts well after the read, sign of a very rare power, that of a truly good book, which knows how to carry the reader into a story. Christine Leunens      [. . .] always has the immense merit of surprising and captivating.  Caging Skies  is one of these books that cannot be forgotten.”
Jean Soublin, Le Monde

“One wonders why this beautiful, strange and terrible subject had never been taken before. A masterpiece [...] the book fascinates and leaves a rare impression of strangeness and power.”
​Dominique Fernandez, Le Nouvel Observateur

“The Tattooist of Auschwitz, The Book Thief, The Boy in The Striped Pyjamas - all are brilliant books that give us a glimpse into the Jewish experience during WWII. Caging Skies is no exception - and might be the most brilliant of them all... Disturbing, moving, eminently readable, enthralling throughout - this is a story you won't be able to put down."
My Weekly

"A bold novel of great fierceness, insight, and emotional savagery. I admire Leuens's refusal to soft-soap anything, even as, while reading, I had to put the book down and pace around the room. But if you stick with Caging Skies, you'll get an entire era distilled into two people, a Tolstoyan marvel."
Historical  Novel Society

"An analysis of the uncontrollable fecundity of a lie, which gives way to life and concrete experience. The lie doesn’t mystify or disown reality, but rather becomes the plasma of one’s desires and the adjusting to one’s necessities. The liar himself falls into a spiral of self deception until he consciously cages himself in a virtual universe, whereby the internal truth and false, fiction and authentic constitute one.”
La Stampa

“The best part of this interesting novel is its ability to show parts of our history which others dismiss: why suffering can make some people more sensitive but others more cruel, and how a war, such an outrage to human dignity, blurs the line between the victorious and defeated.”
Elle

"It's powerful, haunting stuff. Christine Leunens' writing takes us through the plot fluently with momentary sparks of black humour, and always in the very subjective voice of Johannes. It's remarkable that a female author born in 1964  manages  so successfully to immerse readers in the mind-set of a young male Nazi while ensuring we reflect on him and judge him too.   Caging Skies  is a huge achievement. The thoughts it has provoked in me will churn around my mind for a long time."
Yorkshire Magazine

"Leunens utilizes hard hitting prose, sarcasm, and black comedy to bring out a book that will be impossible to forget.  A major literary talent has emerged and I for one, am anxiously awaiting her future novels.'
Stacy Alesi

“The opening lines of Christine Leunens’s novel are more like poetry than prose. Certainly, it presents a fascinating psychological study in self-justification. Leunens has an ear for language and the ability to create a vividly sensual world for her characters that I found highly satisfying.”
The Otago Daily Times

“A novel that breaks all the rules. In spite of this, or maybe because of it, the result is a disturbing and gripping novel that has haunted me ever since I finished reading it.”
New Zealand Books

“Leunens is a practised hand at quarrying the strange and powerful.”
David Cohen, The New Zealand Listener

“A fine range of psychological relationships going on through this big story. It is a major ambition and significant accomplishment as a book. Leunens does a remarkable job capturing the nature of the two people and the complicated relationships among them. An imaginative novel, daring, singular, adventurous. I’m commending it as much as recommending it.”
David Hill on Nine to Noon, Radio NZ National

“So vividly written about that appeal Hitler Youth had on these young vulnerable kids.”
Lynn Freeman on The Arts Programme, Radio NZ National

“Rare. Powerful. Keep an eye on this writer.”
Radio Rai 2

“The writing of Christine Leunens is a real pleasure to read and boasts beautiful stylistic finds. Caging Skies is a successful autopsy of the empire of passions. It is impossible to never recognise oneself in the setbacks of the protagonist.”
Evene - Le Figaro

​“Christine Leunens’ novel   Caging Skies begins in Austria at the time of its annexation to the German Reich. Narrator Johannes Betzler is [. . .] a boy who innocently embraces the Nazi dream. He becomes a member of the Hitler Youth but soon makes a devastating discovery: his parents are hiding Elsa, a young Jewish woman, behind a false wall in their house. That parents became afraid of their children is an electrifying element of the time. It’s rich ground for fiction. The Betzler family is a vital, believable group. For the reader, drawn into the subtle interactions of the Betzler house, Leunens’ clear, elegant prose and sometimes blackly comic tone, this would be satisfying enough. There is more to come, however. The madness of the war has entered Johannes.”
Charlotte Grimshaw, The New Zealand Listener

“Leunens has created a powerful, imaginative and clever psychological drama. In dealing with obsessive love and self-delusion, she views truth and lies at the political and personal level.”
Nelson Mail

“There is no help for the reader: it  is an aching journey, somtimes funny or heartwarming, other times horrific. Reading Caging Skies traps the reader in the mind of Johannes as he ages, demonstrating that sometimes the things -and people- we love most become our cages."
BookTrib