A Can of Sunshine, my third book, had recently come out in New Zealand and my years of solitude putting words and scenes to paper were all of a sudden giving way to speaking in front of hundreds of people at literary festivals, universities and diverse adult groups. Then an unexpected request came in – a local primary school asked me if I’d come talk to their children about writing.
At first I felt daunted. Children? Their questions can be blunt. And what if they asked no questions at all? And I stood in a sea of dense silence? Not in my comfort zone... besides, I wrote adult literary fiction... nothing kids could fully grasp or should actually even know about. But, wanting to contribute in some way, in the end I decided to give it a go, so on the morning of 10 March I began my talk by explaining to the large crowd of children sitting on mats in the assembly hall that though I was called a ‘writer’, it would be more exact if I was called a ‘re-writer’ or better yet, ‘a re-re-re-writer’, because that’s about how many drafts I have to go through before I show my manuscript to anyone. Writing, I went on to tell them, is about finding the right words and phrasing to help others see things as vividly as one does in a dream; to hear, smell, feel and taste existence with more zest than ordinarily. It’s not so much about bringing the language ‘to life’ as it is bringing people ‘to life’.
At some stage I told them that finding just the right word can be a real treasure hunt and passed around my thesaurus, a voluminous hardback with pages as thin as a pocket Bible. Then I used it to show them how many different ways one can ‘walk’ (‘lumber’, ‘amble’, ‘stomp’, ‘march’, ‘trudge’, ‘ramble’, ‘saunter’, ‘stroll’, ‘shuffle’) and ‘eat’ (‘devour’, ‘pick at’, ‘munch’, ‘wolf down’, ‘nibble’, ‘gnaw’, ‘feast upon’, ‘partake of’) until giggles started to break out. I confess that by that point I had become something of a mime and was actually starting to enjoy myself.
I also told them that reading and writing were, at least to me, inseparable activities. Writers read and re-read their work as much as they write and re-write it – even more at the latter stages, reading it from front to back again and again, while just tinkering with a last few dozen words and sentences. And how reading/writing brings us to feel empathy for each other as we are drawn entirely into a character’s mind and skin, so that we experience his or her life as they would, from the inside. Literature allows us to transcend time and space, to go beyond race, culture, age and gender (all this part I, of course, put in simpler words). In sum, books make us feel, relate, care.
Question-time came and what I was asked was not at all so different from what adults usually took the microphone to ask (‘Are my characters made up or are they people I really know?’ I even got the ‘How much money do you make?’ one). But the last question, asked by a soft, innocent voice, no one had ever asked me before: ‘Does writing make me happy?’
How could I explain to these young children that writing sometimes gives me pain, especially as I write about hard subjects such as war or death; reviews can please like they can hurt, but that at the end of the day, the very end of it, when after years and years of work, a book is finished and I hold the edition for the first time in my hands, it gives me... er... satisfaction?
I actually left the hall after the applause of small hands, feeling quite happy.
But that day had more to bring. In the afternoon, I had a call from the school, urging me to come by again, if I could – a teacher had something incredible to show me. Curious by nature, I made my way there directly, whereupon the teacher told me that after I’d left, all the students were made to go straight into writing. Their writing, she beamed, turned out far better than usual – but what she really wanted to show me was ‘this’. ‘This’ was a red notebook with pages of small rectangular blocks embossed with tiny patterns of dots that I could hardly distinguish one from the other as I ran my fingers over them. This piece of writing was by Holly, a clever, blonde girl born blind, who learns French and piano, and who had been sitting quietly at the back of the hall during my talk. Usually Holly writes a few lines on her braille machine, but after what I said about words and ‘seeing’, she had produced these pages. By hand, her assistant carefully transcribed the original dotted cells into our Roman alphabet so that what was written could be read by non-readers of braille. As I turned the pages, I slipped into Holly’s house, her family, her experiences moment by moment, her skin – so sensitive to compensate for her lack of sight, it drew me into her tactile, richly scented, resonant life heretofore unknown to me. I felt a curious dissipation of time and space – Louis Braille, France, in the early 1800s and Holly in New Zealand in the early 21st Century, and the continual benefit still growing out of his – there’s nothing else to call it – great ‘vision’. Words, when patterned together in just the right way, be it by dots, scribbles of ink, or printed font, give us a rare glimpse into the shared emotional core of our humanity. This little girl, without knowing it, had given me a sharp insight into how words and ‘seeing’ transcend even sight.
Dedalus Books Authors’ Blog, 2013

A Can of Sunshine, NZ Herald’s Best Books of the Year 2013
Caging Skies, nominated for the Prix Médicis 2008
Primordial Soup, “a remarkable debut novel” The Sunday Times, 1999 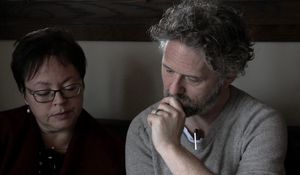 Desiree:   When I met Christine two years ago, she gave me a copy of Caging Skies and I was instantly hooked. Why did her moving story of love, war and survival haunt me so? My father was a Holocaust survivor who was both helped by courageous, righteous people and betrayed by others. He taught me to live by the Golden Rule: “Do onto others as you would have them do unto you.” As I peered at the world through the eyes of an innocent Viennese boy (Johannes)   who grew up embracing Hitler’s terrible lie, I found myself stepping inside a haunted house, into a love story that encompasses the most complex of human emotions, set against an extreme backdrop in which all lives are at stake. Life or death. What would I do? Would I stand up for my values, risk my life, the lives of my loved ones, to save another? Looking at the realities (and alternative facts!) of today’s world, I hope we will never be confronted with finding the answers to these heart-wrenching questions.
Writing the play has been a challenging and fascinating journey – distilling, creating and weaving all the threads into a new form, while staying true to the novel. As we approach the premiere, listening to my husband, Yury Gezentsvey, perform on the violin the recording of Jeremy Cullen’s stunning music, and watching our extraordinary cast – Tim Earl, Comfrey Sanders, Claire Waldron and Donna Akersten – embody Johannes, Elsa, Roswita and Oma under the brilliant creative vision of director Andrew Foster, is beyond exciting!

Christine:   When I read Desirée Gezentsvey’s play adaptation, I felt she had entered the universe I had created and had understood it with the same intimacy and depth I did. She saw not only the darkness, but also the potent need for love, the humour and passion for life that rises above war and the worst of humanity. I couldn’t believe how complete the play adaptation felt to me.
As the news came that Andrew Foster would be directing the play at Circa Theatre and that others were getting involved, I really felt that something rare, wonderful and communal was happening. It was a pivotal moment for me seeing the actors’ faces for the first time, as if the characters in my inner dream stepped out of the confines of the page and were going to be given the opportunity to exist in ‘real life’, if only for a couple of hours at a time. It has been an extraordinary journey with Desirée, from a common hope to the tangible realisation of complexity; and to see how the story continues to live independently of me is something I, as an author, couldn’t have wished more for!

Andrew:   What fascinated me about the play was the way in which Desiree has used the vernacular of modernist and existential theatre so that the ‘reality’ that is constructed has very little connection with the reality outside the house. It may be 1944 but the characters, whom we only ever see inside the house, exist in a Pinteresque limbo… I was drawn to the complexity of the relationship between Johannes and Elsa, to the mystery of it. Who’s in control?